[NOTE: Since today is a significant date in cultural/entertainment history, I'm deciding to re-run this post from a year ago. Edited to correct a minor factual error, to update the anniversary, and to add the picture.] 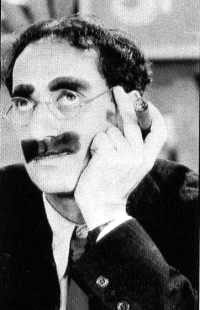 Today is the 28th anniversary of the death of comedian Julius Henry "Groucho" Marx. His death, at the time it happened, was not noted as fully as his genius deserved. Unfortunately Groucho, who was a master of comic timing during his life, wasn't as good at timing his passing. The unfortunate passing of another cultural icon merely three days before tended to drive Groucho's death out of the news.

I first got into the comedy of the Marx Brothers in college, which is (I suspect) where a lot of us developed our taste for their humor. As a general rule, my taste in films tends strongly towards comedy, and I don't think I've seen any films funnier than the Marx Brothers classics (there is no doubt that I have never laughed harder than I laughed the first time I've seen these, and I'll still chuckle when I see them today, even though I've seen them countless times): The Cocoanuts, Animal Crackers, Monkey Business, Horse Feathers, Duck Soup, A Night at the Opera, and A Day at the Races. The Marx Brothers films after those weren't quite as good, though as a former lawyer I have always had a special fondness for At The Circus, in which Groucho played the attorney J. Cheever Loophole. At The Circus also features one of the two songs most associated with Groucho, the comic "Lydia the Tattooed Lady":

Oh Lydia, oh Lydia, say, have you met Lydia?
Lydia The Tattooed Lady.
She has eyes that folks adore so,
and a torso even more so.
Lydia, oh Lydia, that encyclo-pidia.
Oh Lydia The Queen of Tattoo.
On her back is The Battle of Waterloo.
Beside it, The Wreck of the Hesperus too.
And proudly above waves the red, white, and blue.
You can learn a lot from Lydia!

When her robe is unfurled she will show you the world,
if you step up and tell her where.
For a dime you can see Kankakee or Paree,
or Washington crossing The Delaware.

Oh Lydia, oh Lydia, say, have you met Lydia?
Lydia The Tattooed Lady.
When her muscles start relaxin',
up the hill comes Andrew Jackson.
Lydia, oh Lydia, that encyclo-pidia.
Oh Lydia The Queen of them all.
For two bits she will do a mazurka in jazz,
with a view of Niagara that nobody has.
And on a clear day you can see Alcatraz.
You can learn a lot from Lydia!

Come along and see Buffalo Bill with his lasso.
Just a little classic by Mendel Picasso.
Here is Captain Spaulding exploring the Amazon.
Here's Godiva, but with her pajamas on.

Here is Grover Whelan unveilin' The Trilon.
Over on the west coast we have Treasure Isle-on.
Here's Nijinsky a-doin' the rhumba.
Here's her social security numba.

Lydia, oh Lydia, that encyclo-pidia.
Oh Lydia The Champ of them all.
She once swept an Admiral clear off his feet.
The ships on her hips made his heart skip a beat.
And now the old boy's in command of the fleet,
for he went and married Lydia!

The other song associated with Groucho is, of course, his theme song (from Animal Crackers), "Hooray for Captain Spaulding". Unlike "Lydia", "Captain Spaulding" is known less for the lyrics than the music, which was the theme for Groucho's "You Bet Your Life" as well as for his personal appearences for the rest of his life.

And then there was "You Bet Your Life". At first a radio quiz show, Groucho moved to television in 1950 and ruled NBC's Thursday night lineup until 1961, when the quiz show scandals pretty much killed the genre for a couple decades. As a quiz show, "You Bet Your Life" wasn't much, and it didn't give away much money compared to the other quiz shows on the air at that time. The quiz was irrelevant to the whole point of the show, which was to get Groucho to interact with the contestants for about 10 minutes or so, trusting to Groucho's laserlike wit to come up with hilarious ad-libs. Unfortunately, I've only been able to see the show in re-runs, so I don't know if I'm getting a filtered version, but generally, Groucho rarely disappointed. However the most famous of Groucho's interactions, with Mrs. Story:

Groucho: So, Mrs. Story, it says here you have 19 children?
Mrs. Story: Yes, that's right.
Groucho: Why do you have so many children? That's a big responsibility and a big burden.
Mrs. Story: Well, Groucho, I love my husband.
Groucho: Lady, I love my cigar but I take it out of my mouth once in a while.

was quashed by the radio censors, so only the studio audience got to hear it, and to the best of my knowledge it was never preserved on tape for later generations to enjoy. But some wonderful bon mots did manage to get on the air.

Groucho: Where are you from?
Girl: I'm from Ralph's Grocery Store.
Groucho: You were born in a supermarket, eh? I thought supermarkets didn't make deliveries anymore. . . Oh? You're the cashier? Now it begins to register!

And there are few other television shows which have had such a significant effect on American popular literature and film. How? One of the contestants on "You Bet Your Life" was an aspiring writer who won about $10,000 on the show. Groucho asked him what he intended to do with his winnings, to which he replied that he was going to take some time off to "work on a novel".

The contestant was William Peter Blatty. The novel was The Exorcist. The rest, as they say, is history.

I got to see "You Bet Your Life" on Pat Robertson's Christian Broadcasting Network in the mid '80's, and on Rev. Larry Rice's family-friendly independent TV station in St. Louis in the late '80s and early '90s. I always thought that it was ironic that it would have been folks like Robertson and Rice who, when Groucho's show was in its first run on the air, would have strongly protested his "filth" and "obscenity"; but thirty-plus years later they were choosing Groucho to run on their "family programming" stations.

In honor of Groucho, a few more choice observations:

I'd never want to belong to a club that would have me for a member.

I find television very educating. Every time somebody turns on the set I go into the other room and read a book.

I never forget a face. However, in your case I'll be glad to make an exception.

Now there's a man with an open mind - you can feel the breeze from here!

I've had a perfectly wonderful evening. But this wasn't it.

Those are my principles. If you don't like them I have others.

I have nothing but confidence in you, and very little of that.