Just because I had a camera and the novelty hadn't worn off yet... Pictures are, of course, below the fold.

Saturday morning, with some time to kill before leaving for the concert, I decided to take off for Millennium Park after my sentimental breakfast at the Original Pancake House. I entered the park near Wrigley Square and the Millennium Monument (Peristyle), above. The McCormick-Tribune Plaza. Featuring the Plaza Grill, an upscale eatery/imbibery, and a few other establishments. The outdoor bar/restaurant area, which dominates the picture, above, converts to an ice rink during the winter months. 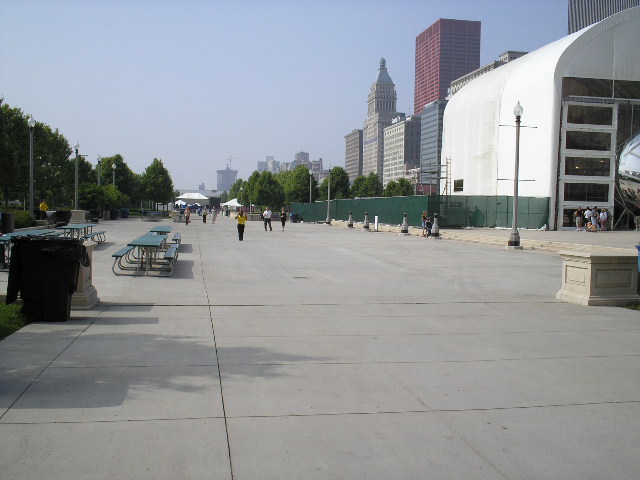 The Cloud Gate in the Chase Promenade. Currently tented as they finish working on it.

Next stop as I ambled through the park was the Jay Pritzker Pavilion, and the Great Lawn. Worthy of a number of pictures, and I took them: 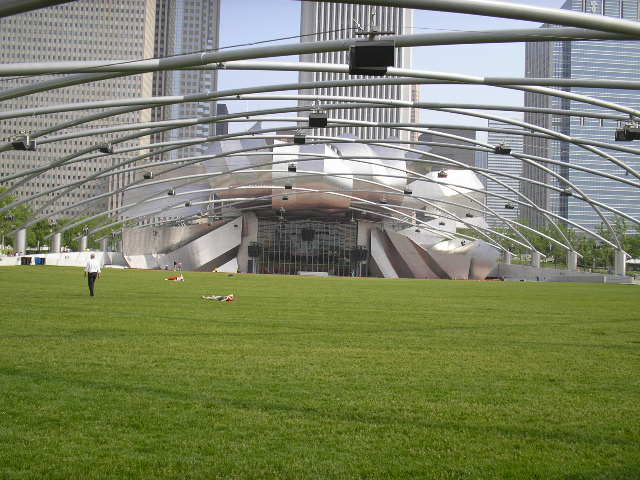 View of the Pavilion from the south end of the Great Lawn. Note the trellis (and speakers suspended therefrom) over the Lawn. Part of the architect's master plan to bring the concert as close to the folks on the lawn as it is to the people in the seats. 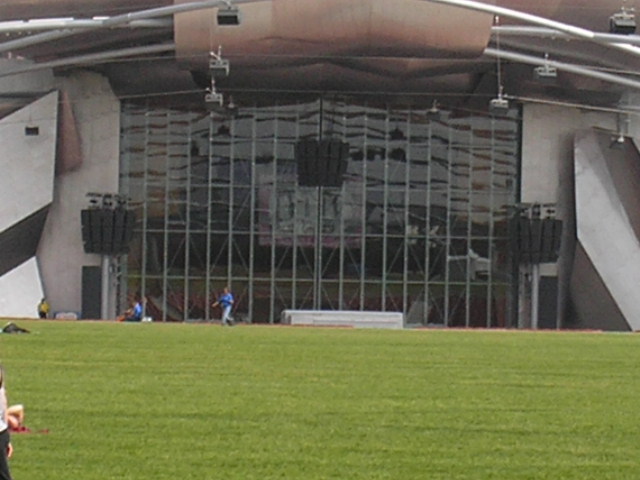 A closer view of the stage in the Pavilion. 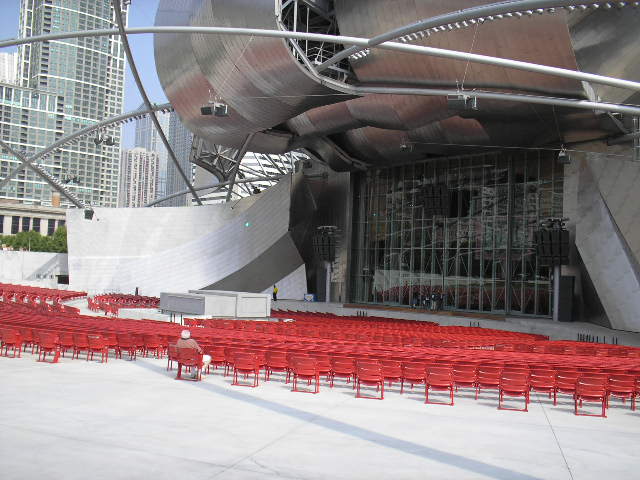 View from the right of the stage. View from the rear center of the seating area. I want to have a long talk with whoever thought it was a good idea to put this big grey box in the middle of the seats. And then grab him/her by the lapels and smack her/him around a bit. Unless this is merely a cover for, say, a soundboard, and is removed during actual shows, though it's pretty clear to me from this picture that whatever is beneath the box still blocks off a significant amount of the view of the stage from the seat I was sitting in when I took this. 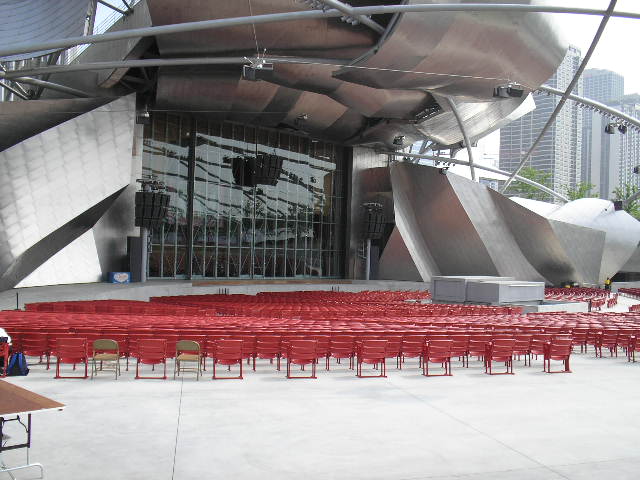 And a view from the left. 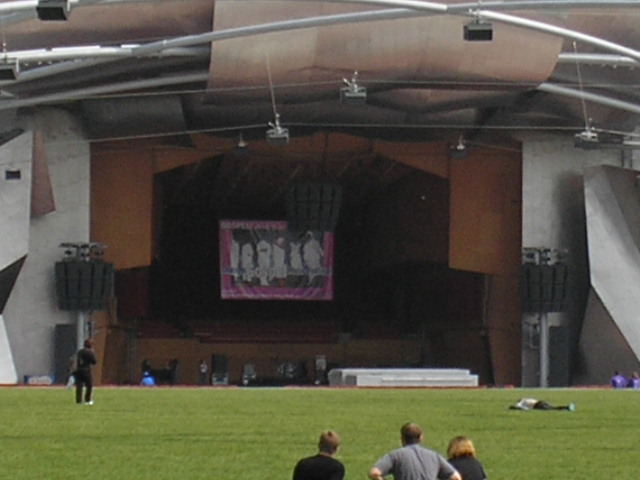 A bit later in my visit, they'd raised the glass curtain and let us get a better look at the stage (they were preparing for the Chicago Gospel Music Festival, which was going on that weekend).

One "feature" of the park are security guards. A lot of them (what is it? Don't they trust us?). Some are on Segways; this was the first time I'd ever come face to face with one of the beasts. Apparently, the guards are used to being camera fodder; this one started going into his "act" the minute I approached with my camera: Another attraction is the Crown Fountain. From the description at the Millennium Park Website:

The fountain consists of two 50-foot glass block towers at each end of a shallow reflecting pool. The towers project video images from a broad social spectrum of Chicago citizens, a reference to the traditional use of gargoyles in fountains, where faces of mythological beings were sculpted with open mouths to allow water, a symbol of life, to flow out. Plensa adapted this practice by having faces of Chicago citizens projected on LED screens and having water flow through a water outlet in the screen to give the illusion of water spouting from their mouths. The collection of faces, Plensa's tribute to Chicagoans, was taken from a cross-section of 1,000 residents. 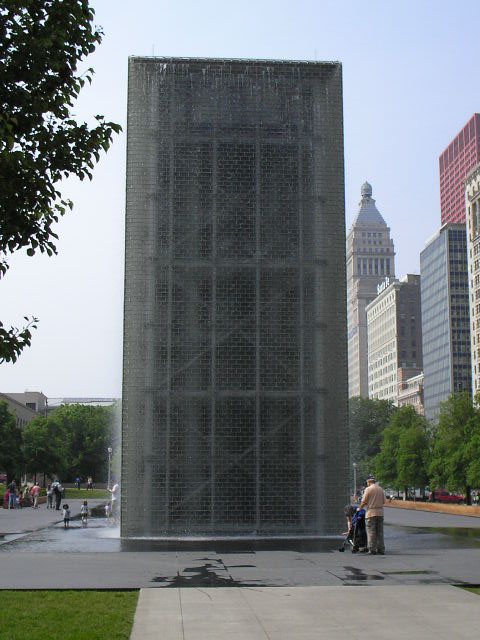 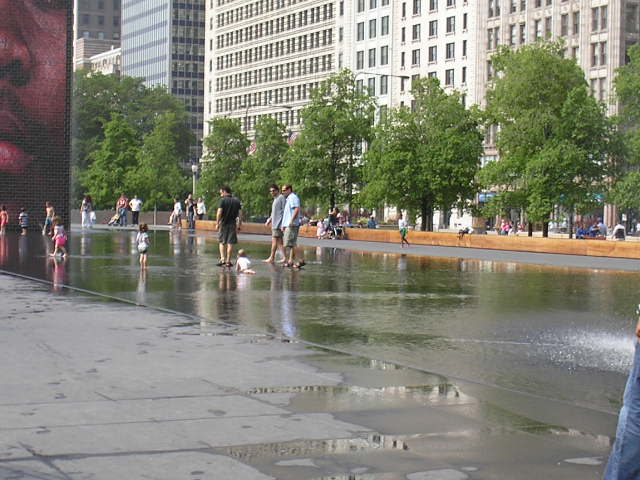 Fun for kids of all ages, as the saying goes.... An example of the "spouting" effect mentioned above. Even more impressive in person. One thing that did leave me a little uneasy was the very obvious patina of corporate sponsorship; practically everything in the park is named after a sponsor, many corporate. Yet Another Corporate Plug, the BP Bridge: And just south of the Pritzker Pavilion is the Lurie Garden: By that time I decided to grab a diet Coke back at the McCormick-Tribune Plaza, and then head back to the hotel for a rest before my evening's adventures. All in all, Millennium Park is a very enjoyable experience. It'll be even better, IMHO, in a few years once the "newness" has worn a bit off, and the trees have grown into the park a bit. While the intrusive corporate sponsorship made me a bit uneasy, I do realize that in this day and age, nothing gets done without corporate money, and naming rights are a large part of that game now. Still, the park is a must-see when next you visit Chicago!