I attended the game last night (the second game of the first day/night doubleheader ever held at AutoZone Park), to watch Mark Nussbeck lose a heartbreaker, 1-0 against the New Orleans Zephyrs. Nussbeck can't really be faulted; he pitched seven strong innings, allowing only one run on five hits; the Zephyrs scoring their only run on a sacrifice fly by Dee Brown in the top of the seventh. Unfortunately, while the Redbirds managed to tag New Orleans pitching for six hits, their bats were silent when we had runners in scoring position. It was also a quick game (about 2 hours and 12 minutes or so), which was good because there was an hour and 10 minute rain delay to start: 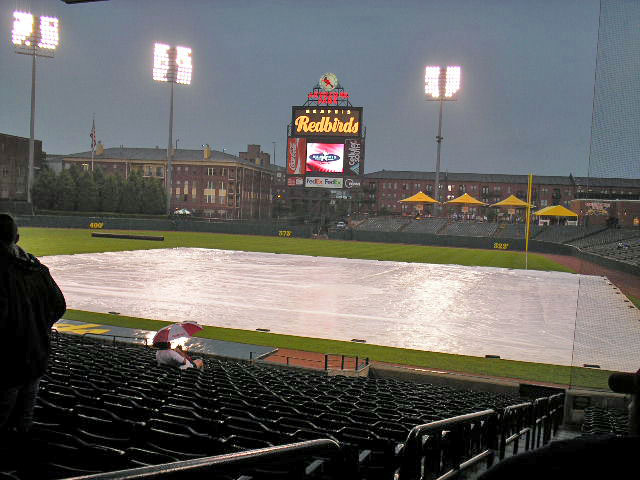 Fortunately, I was in a position where I could sneak down and get some pretty decent pictures. You can see them below the fold, if you're interested.... 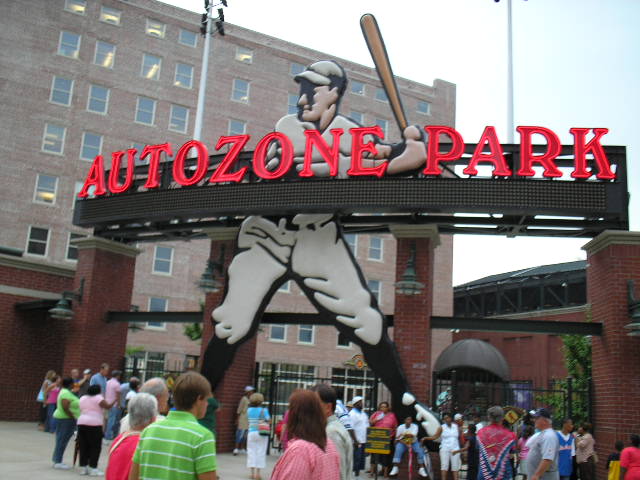 The front gate of AutoZone Park. The figure pictured here is called "Nostalgia Man" (at least on some of the merchandise featuring the figure in the Redbirds official store, the Backstop Baseball Emporium), and can also be seen on the official Memphis Redbirds logo:

And of course, it being a Friday evening, there has to be some pregame entertainment: 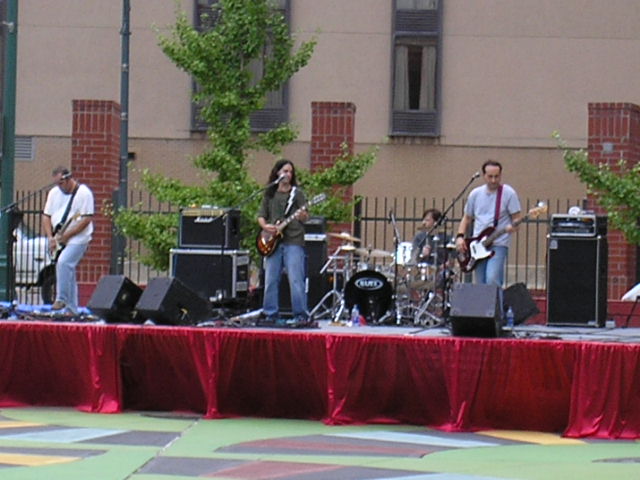 I don't know who the band was; I'd not received any pre-game publicity telling me. 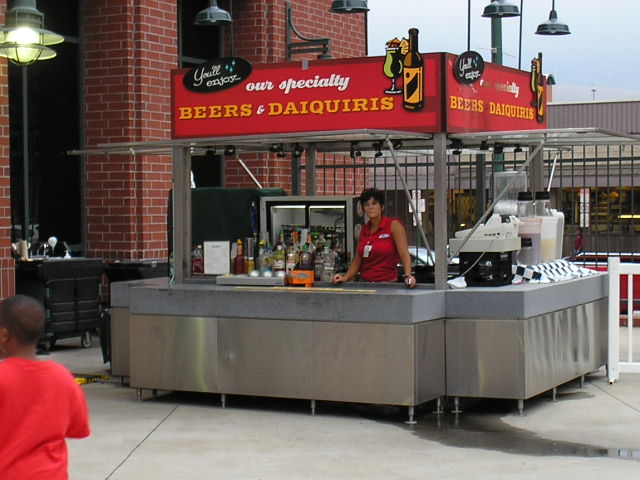 And for those of you who prefer libations that are a bit more upscale than Bud or Miller, AutoZone is able to accomodate you. 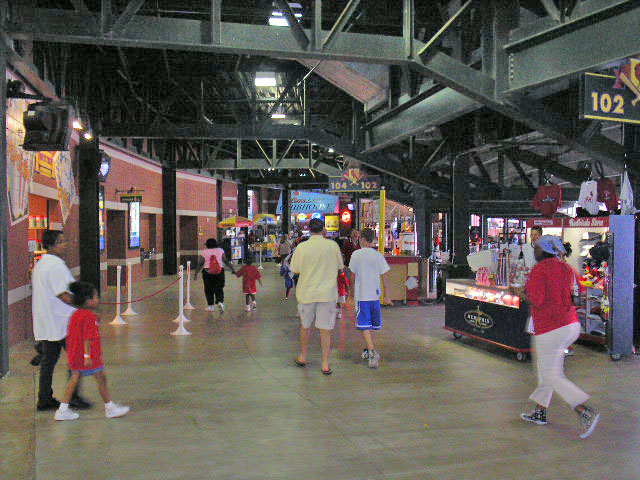 As you come into the park, this is the view looking north up one of the concourses. Where, of course, you can purchase your minimum daily requirement of ballpark food and Redbirds merchandise. 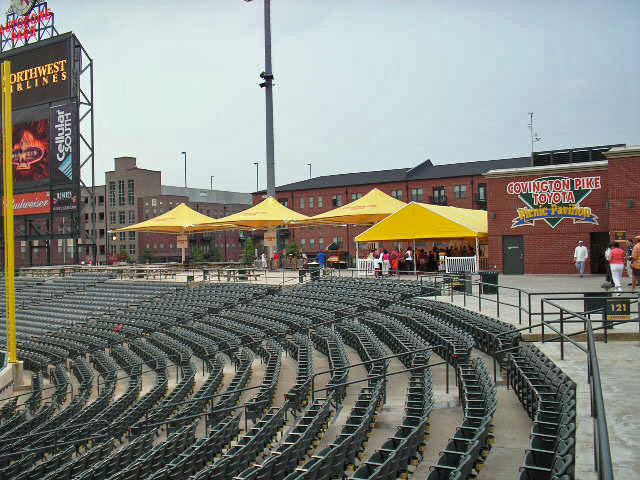 The Picnic Pavilion. The area can be booked for groups, who can then be feted with a ballpark buffet on gameday. 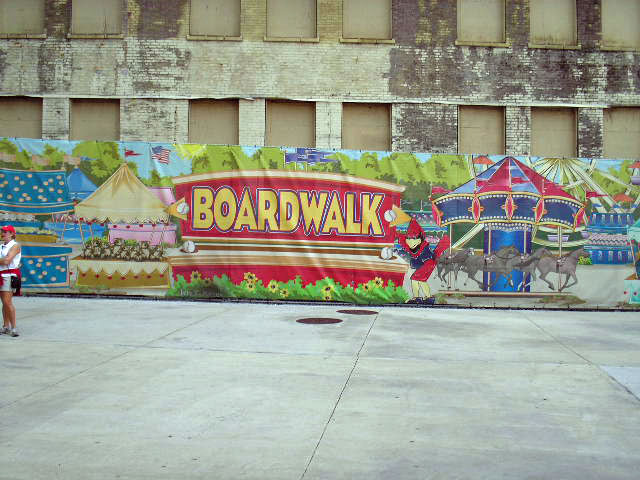 The Boardwalk. Because sometimes the family needs some entertainment. 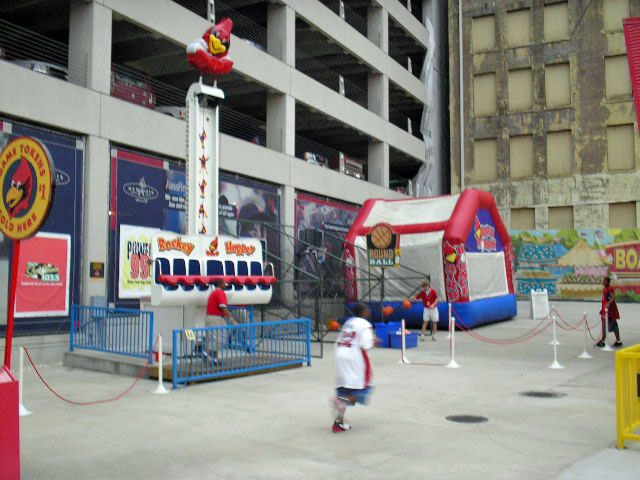 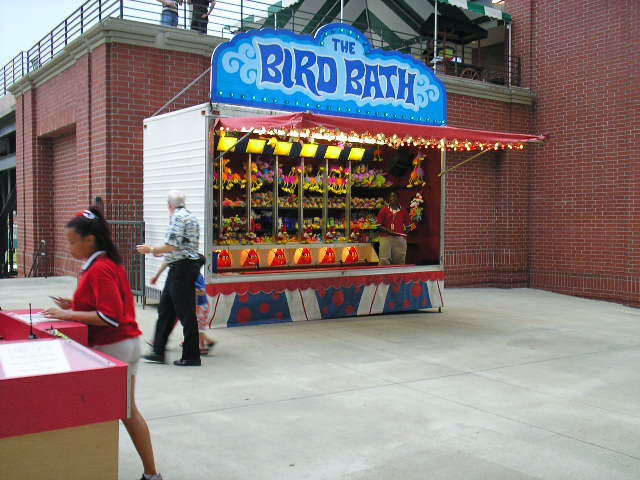 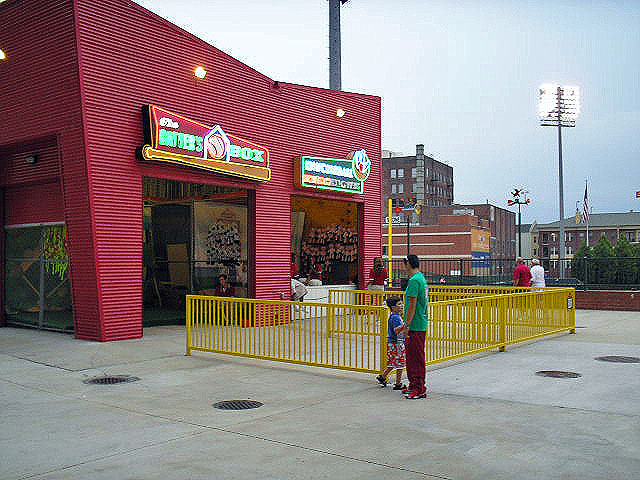 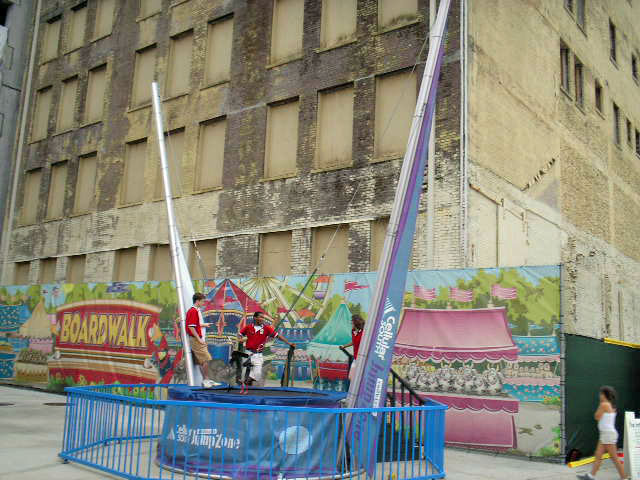 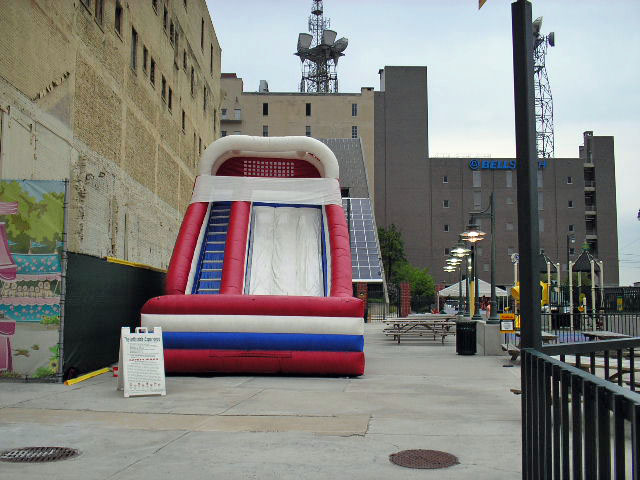 And for the younger kids: 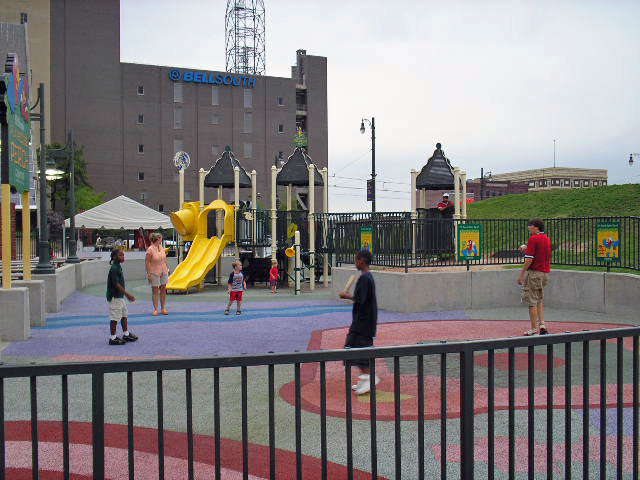 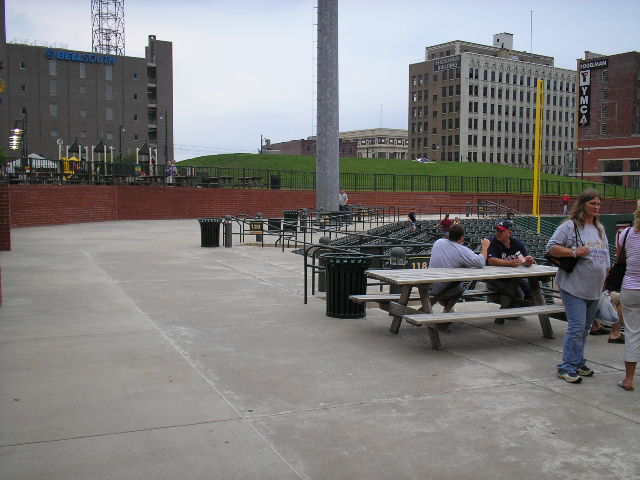 And a view of "the Bluff", which isn't a bad place to hang out and watch the game. 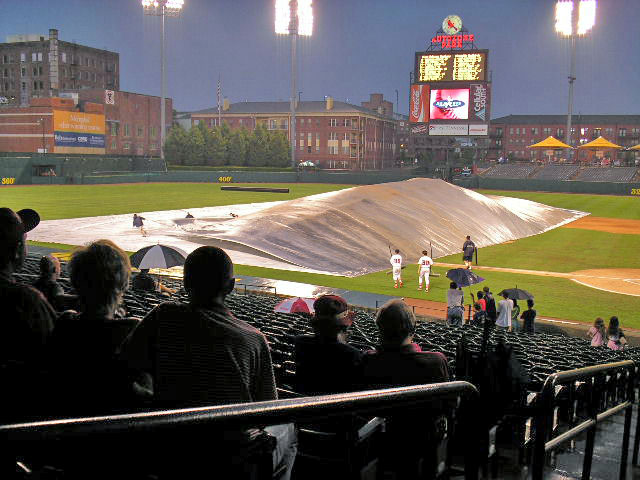 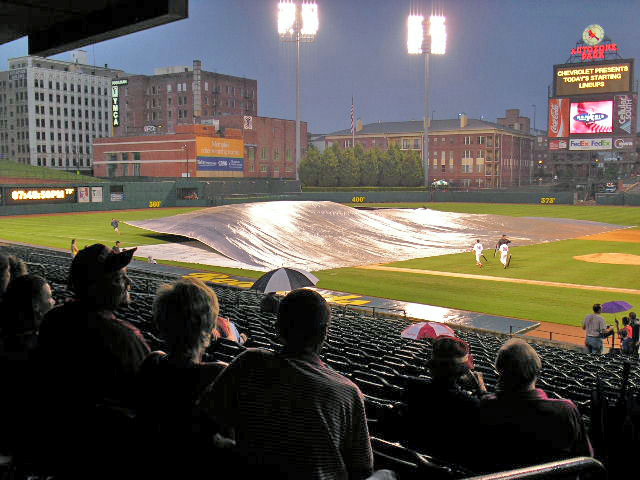 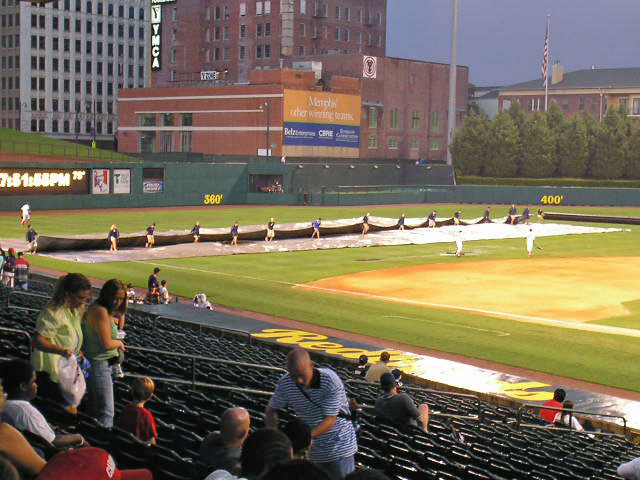 The rain finally abates, and the tarp is dragged off the field. I never had the chance to see this operation before, so I didn't know how intricate it really was... 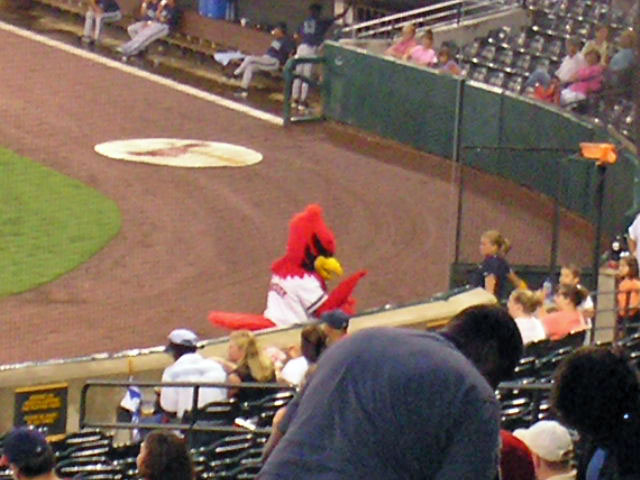 Of course, no Redbirds game would be complete without an appearance (correction: many appearances) by Rockey Redbird, the team mascot.

During the game I was able to sneak up to an unoccupied seat in the first row, very near the Redbirds dugout, where I was able to get a few good pictures (until the usher suggested that I needed to return to my seat).... 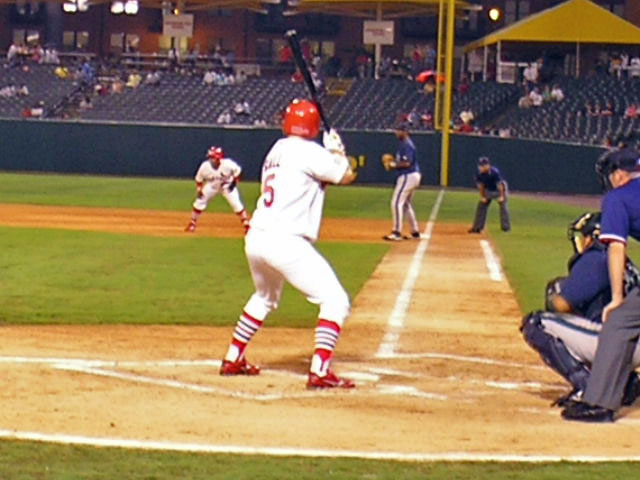 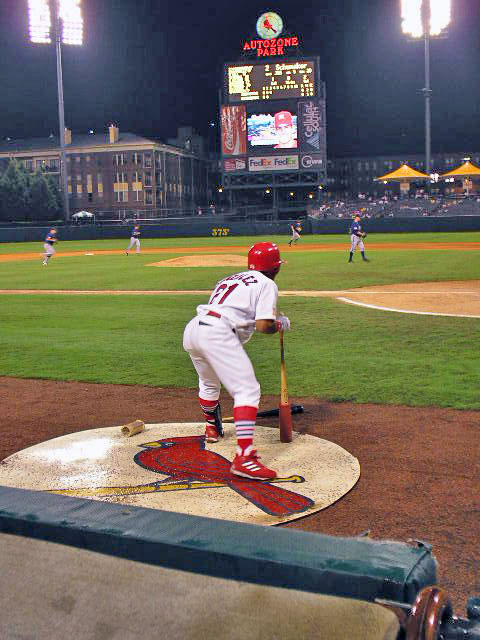 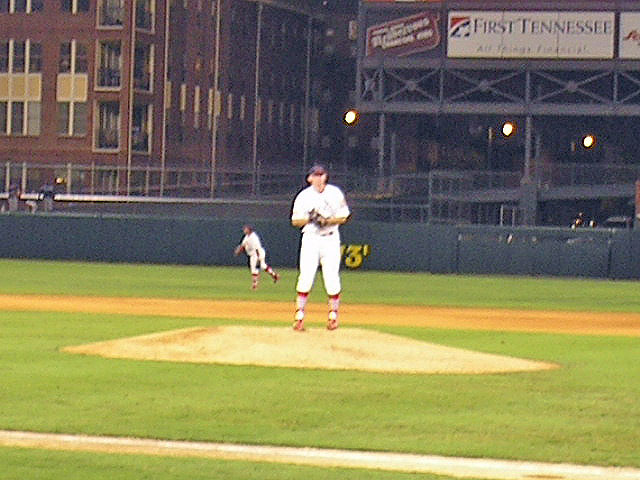 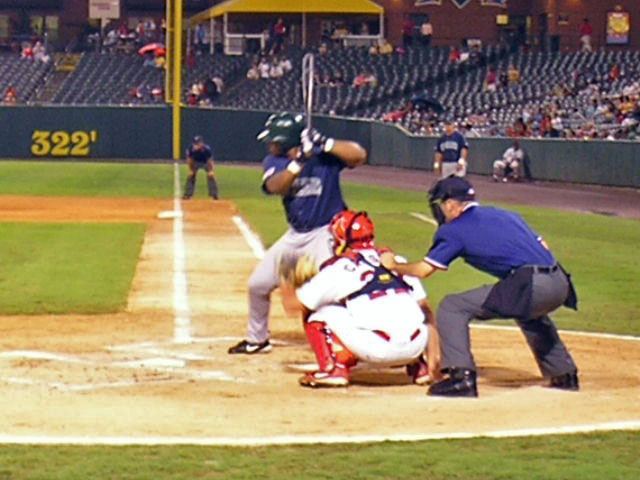 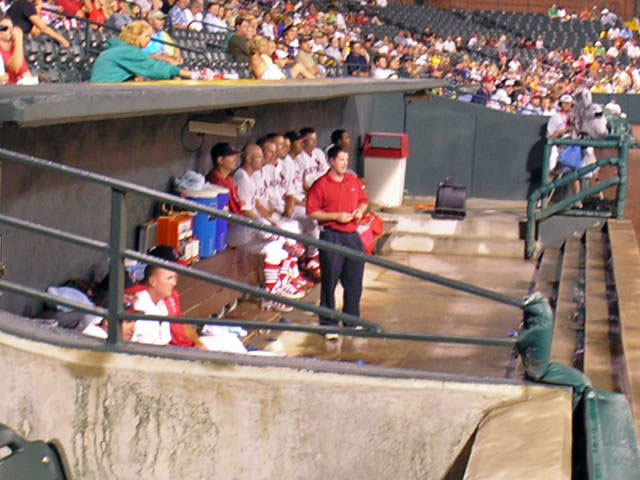 The Redbirds dugout, and... 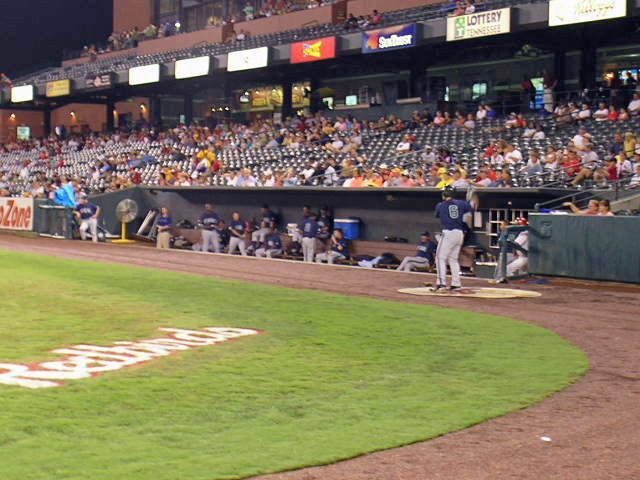 The Zephyrs in the visitors' dugout (Zephyrs shortstop Jason Bowers is on deck). 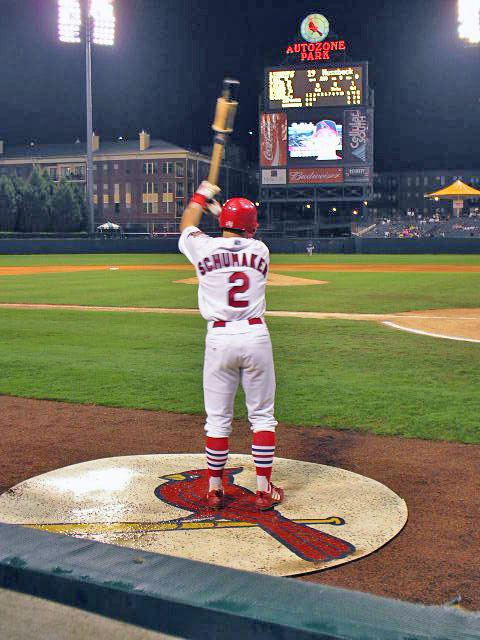 Redbirds leadoff hitter and centerfielder Skip Schumaker, in the on deck circle. 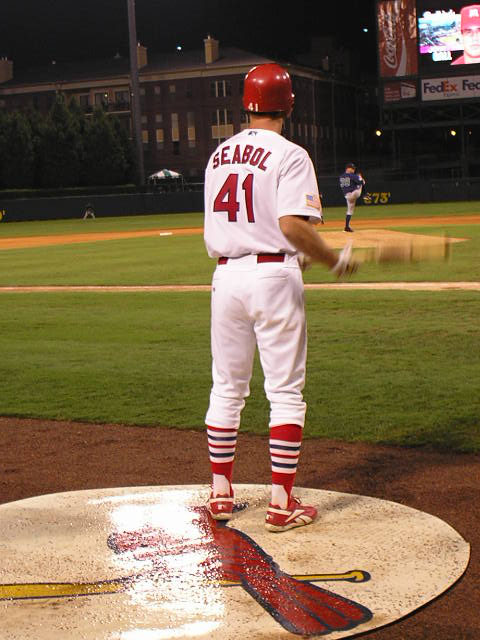 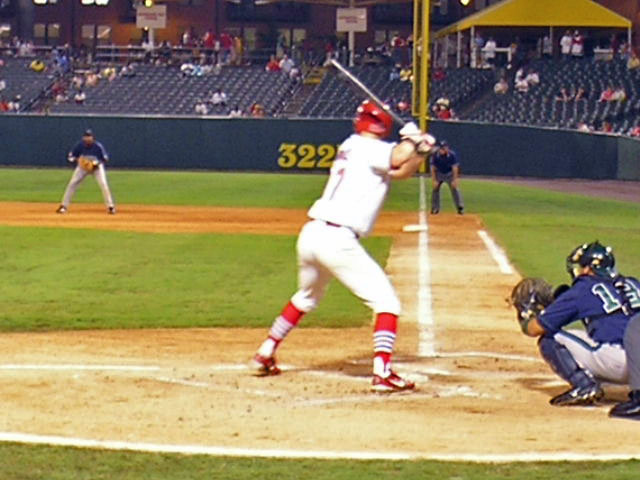 and at the plate. 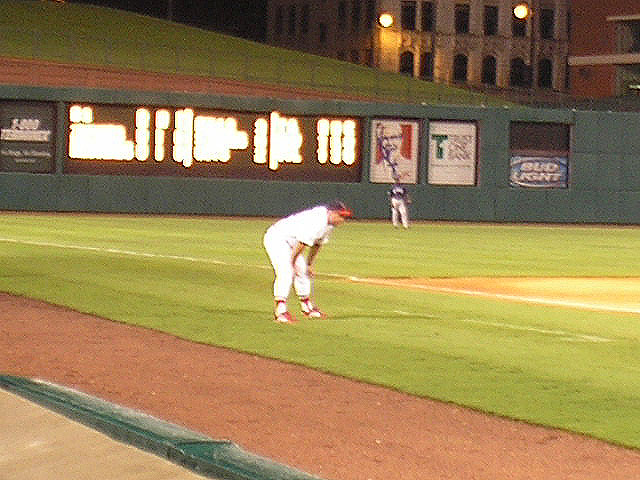 All told, an enjoyable evening, even though the rain dampened matters early on. At least the Redbirds won the first game of the day's day/night doubleheader, so the evening wasn't at all a total loss.