One of Those CRAZEE folks over at Google wanted to have some FUN and see what an eighth of a ton (250 pounds) of Silly Putty would be like to *play with*: 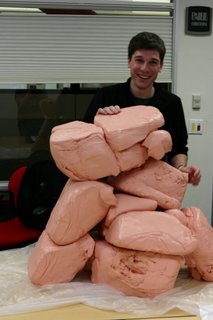 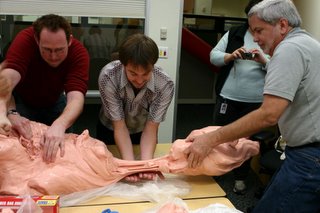 The article is a fun description of the Silly Putty-esque Escapade that followed.

Haven't tried that one yet. Though the family story is told about my eldest brother who got his *egg* of Silly Putty back when the stuff first appeared in 1957.

He had so much fun squishing and forming and bouncing the fabulous-goop that he refused to part with it or put it back in its egg container. Clutching it tightly in his hand, he even took it to bed with him.

One of the properties of this amazing polymer is its ability to "flow" when warmed up...as my brother found out.

But it still FUN stuff. Tho' I don't think I'll be Bulk ordering 250 pounds of it any time soon. *teehee*

Len's sidebar:
About Len (The uncondensed version)
Memorial to a dear friend
Frederick W. Benteen
The Web of Leonards
The St. Louis Cardinals
The Memphis Redbirds
The St. Louis Browns
The Birdwatch
Hey! Spring of Trivia Blog
BlogMemphis (The Commercial Appeal's listing of Memphis blogs)
The Guide to Life, the Universe, and Everything
George Dubya Bush Blows
asshat.org (be sure to refresh your window for more "wit and wisdom" from Our Beloved Leader)
Taking the Fight to Karl
Main and Central (blog by, for and about veterans and their issues)
LordCo Centre
Kraftwerk: Chicago, 6/4/2005
My Chicago: Part One
My Chicago, Part Two
Millennium Park
Miscellaneous Chicago
Busch Stadium Tour and BoSox/Cards Game: 6/6/2005
St. Louis Cardinals Hall of Fame Museum
Len's All-Busch Stadium Team (and the voting results)