Now, just to make sure we residents of Dennis Hastert Corner havent forgotten what a great, hard working guy is our Home-Boy, Dennis Hastert  he sends out these glossy 8x10 photo-op updates [at our taxpayer expense of course] to promote the GOP agenda disfavored by 58% of Americans. 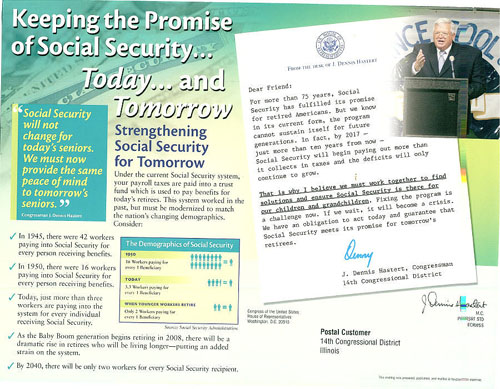 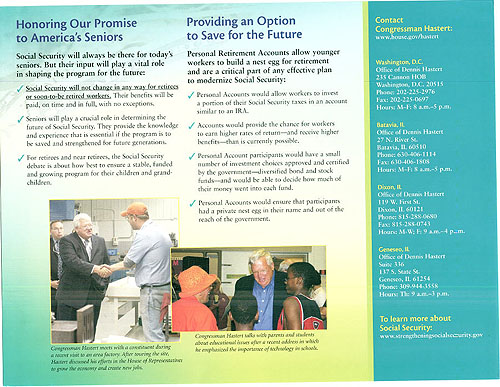 Or as one recent commentator noted at another site:

"Since George Bush is Brain-Dead already, his ideas are Un-dead and can never really be destroyed. They just keep coming back like evil un-dead zombies or vampires."

And so it seems with this notion to create a partial Privatization of Social Security via the implementation of Personal Accounts. -- No matter how the numbers dont add up. No matter how these are NOT private nest eggs in your name  out of reach of the government. No matter how this would, of necessity cut back on the current benefits paid out to retirees and soon-to-be retirees.  The GOP, and Home-Boy, Denny, just keep trotting out these damnable lies and distortions trying to push an agenda 58% (or more) of Americans are opposed to.

Yep, theyre working hard  but hardly for us!!!