1) Len posted a picture of a Chicago place used in a Steve McQueen movie (The Hunter 1980) featuring a car chase scene with an-action-stunt of the vehicle driving off the parking garage and landing in the Chicago River below - What is the name of this building/landmark?

2) As another Movie Q: What Chicago landmark frequented byu Chicago gangsters dating back to the era of prohibition did they blow up in the 19 movie Thief with James Caan?

a) The Green Mill Lounge 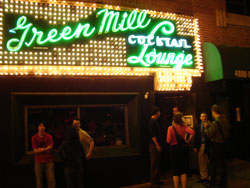 The Green Mill Cocktail Lounge in Chicago, IL notoriety dates back to Prohibition, when Chicago gangsters used the club as a headquarters.

Considered the birthplace of the slam movement in the U.S., the Green Mill has been a fixture of the slam scene for almost two decades. In 1985, Marc Smith launched a reading series at the Get Me High Lounge, another Chicago jazz club. A year later, he relocated the series to the Green Mill and named it the Uptown Poetry Slam. The first slam took place on July 25, 1986, and has been a weekly feature at the lounge ever since
.
The Uptown Poetry Slam presents guest performers from around the country, an open mike for newcomers, and a slam competition, all for a mere five-dollar cover charge. Between two to eight poets vie for the top slot in the slam competition each week and three audience members serve as judges. The poets go head to head in a series of readings until the judges determine a winner. The winning poet has a choice of two prizes: ten dollars or the Big John Scam: five lottery tickets.

3) What was the first Movie Palace built in Chicago in 1921?

5) What was the name of the short lived Federal League baseball team that first played in Wrigley Field in 1914?

The Chicago Whales were owned by Charles Weeghman and were the original team to occupy Wrigley Field as part of the Federal League. That league folded in 1916 and Weeghman purchased the National League Chicago Cubs and moved them from the west side to the Friendly Confines of the new ball field.

6) Chicago was the home to many famous puppeteers and Lawry the Prime Rib was originally a puppet theater. What puppets appeared there?

b) The Kungsholm Puppet Theater

The Italian Renaissance style mansion (home to Lawrys) was first built as a private residence for L.Hamilton McCormick - nephew of the Reaper-King, Cyrus Hall McCormick, and his British wife, Constance Plummer. Mrs. McCormick was one of the society hostesses of the era during the 1890s.

After being widowed in 1934 and raising her 3 sons (Alister, Leander Jr. and Edward Hamilton) Mrs. McCormick leased the home to Mr. Pierre Nuytens from 1935 to 1937  and he trans formed the 400 person capacity ballroom into the Continetal Casino.

In 1937, famed restaurateur, Fredrik A. Chramer leased the building and opened an expensive Scandinavian smorgasbord. The Kungsholm dining room was decorated in a Moderne Swedish style with coats of arms representing each of the three Scandinavian countries. It was Chramer who turned the ballroom into a home movie theater and in 1940 was inspired by Danish puppet shows to create the internationally known Kungsholm Puppet Theater.

7) The term The Windy City was aptly coined for both the meteorological conditions of the Great Plaines weather and the Political long winded-ness of Boastful Chicago Politicians. It first became a phrase used in 1885 in what newspaper?

8) Bonus: This nick name The Windy City is shared by what other city?