[« Constitutional amendment wankery] [How not to Get Fingered for an 'Erroneous Rendition'... »]


I see one of my favorite public editors, Don Wycliff (Chicago Tribune) has been BIZEE - scouring the Tribune archives (Oh Joy) at work on ferreting out the answers to a readers complaint about all that FAB Economic NEWS supposedly hidden by the MSM.

This is a bit of a long post on that piece: Downplaying Bush's big economic hits and my own bits on that Media is liberal canard of a conservative yowling whine that emanates periodically from the wing-nutters camp.

So click on the more button to read further.

Downplaying Bush's big economic hits: Is there an anti-Bush pattern?

His letter was passed along to me as a possible column topic.

It wasn't the first time I had heard this kind of complaint from a reader. Dyslin ticked off several "good news" economic developments of the previous week: new home sales up; durable goods orders up; personal incomes up; consumer spending up; stock market "surging."

"I don't understand," he wrote. "There has been much very good economic news this week [Nov. 27-Dec. 3], yet one has to really dig deep to find it in the Chicago Tribune and even when the good economic news is reported, it is muffled or toned down."

The implication of that last remark is clear: When Democrat Bill Clinton was in the White House, Tribune editors went out of their way to play up the "good economic news"; now that Republican George W. Bush is president, Tribune editors are playing down such news. Ergo, the paper's editors are politically biased.

How to determine the truth?

I took each of the indicators that Dyslin cited in his letter and plugged it into the search field of the Tribune's electronic archive, the SAVE system, which contains every story that has appeared in the newspaper since 1985. I did a search for each term ("new home sales," "durable goods orders," "personal income" and so forth) for 2005, the year after Bush won re-election, and for 1997, the year after Clinton won re-election. As a kind of random check, I searched a couple of other years for a few of the categories. Some of my findings:

- Personal incomes. This term has appeared in 58 stories so far in 2005. Three of those were in the front, or "News," section, none on the front page. One of the three was on the wealth of potential presidential candidates in Congress; one was on the growth in charitable giving by Americans for the first time since 2000, and one was on an appearance by Bush before Florida retirees on behalf of his Social Security overhaul. Good news or bad? You be the judge.

In 1997, the term was in 126 articles, 40 of them in the front, or "News," section, which seems to suggest Dyslin was onto something. But none of those 40 articles could fairly be said to have been in praise of Clinton. One, in January, was about his just-delivered State of the Union speech, in which "personal income" taxes were mentioned. Two, in December, were about his upcoming State of the Union, in which "personal income" taxes again figured. Almost all the rest of the 40 front-section stories were not about the economy, but about the debates in Springfield over enactment of a new system of school funding, with the "personal income tax" as a major factor.

- New home sales. So far this year this phrase has appeared in 69 stories. Two of those have made the News section, both on Page 1. The headlines of those two tell the stories: "Boom's over, but no sign of a bust" and "Bubble talk bursts housing euphoria."

In 1997 the phrase appeared in 58 articles. Nine of those were in the front section, seeming to lend credence to Dyslin's contention that we gave those stories greater prominence during the 1990s. On closer inspection, however, it turns out that each of those nine was in the Evening Update, an afternoon "wrap" that for a few years the Tribune produced and sold to evening commuters. At its peak, Evening Update sold 18,000 copies a day; most of the time, it sold many fewer.

- Job creation. This term, limited by the words "Labor Department," has appeared 12 times so far in 2005, once on Page 1. That one time, on March 5, should have put a smile on President Bush's lips. The headline: "New jobs jump, so Dow gets up and dances."

In 1997, the term appeared five times. One was an Evening Update story on a decline in unemployment claims. The other was a legitimate Page 1 story about a real record: "New jobs add up to a historic standard."

Do I need to go on to such esoterica as durable goods orders and producer prices? What this little excursion into the archives makes clear is that there was no politically motivated effort to use story placement to inflate Bill Clinton's economy and deflate George W. Bush's.

The truth is that most economic news goes into the business section most of the time because it is narrow, abstruse and, to all but Alan Greenspan and his acolytes, pretty damn inscrutable. They don't call economics the dismal science for nothing.

So I had to send Don this:

But I enjoyed the piece about Mr. Dyslin's complaint about You Oh so LIBERAL MSM that just have to dish ole GW at every opportunity. Hahahahaha!!

I had a bit of a similar discussion with a blogging Troll a while back over those media studies that *complain* how biased the media is *supposed* to be (and "Liberal" biased only to hear shills like Bernie Goldberg tell it.)

But interesting thing, while one Stanford study did see the possibility of reporters being influenced by their own personal biases:

It says in part:

30 % of adults see bias as "not being open minded and neutral about facts."

29 % believe it " favoritism to a particular social or political group"

(paraphrasing) the root cause of two forms:

"lack of dispassion and impartiality that colors the decision of whether or not to publish a story...and the tone of how those facts are expressed" OR

"as an intent to persuade."

When they move from fact to analysis , their (journalists) decisions are subject to errors of judgment and selectivity of perception.

However, a separate study of actual journalists has these findings:

 On select issues from corporate power and trade to Social Security and Medicare to health care and taxes, journalists are actually more conservative than the general public.

 Journalists are mostly centrist in their political orientation.

Taking the Stanford Article Premise as TRUE would say that when you factor in the actual policy views of actual journalists which What you get is that those biases are:

Journalists are Centristly Biased on Politics

Plus - A CNN/USA Today/Gallup poll in late August found 54 percent of Journalists describing themselves as pro-choice and only 38 percent as pro-life, roughly the same percentages as a decade ago.

So, what Bias exists in the MSM would be decidedly *Conservative* - not Liberal except on a few issues.

But... according to my Troll the press is TOO hard on the ole Pres and he claimed this absurd bit (without any citations to back these numbers up who knows where this crap came from):

The study found Bush received negative treatment about 70% of
the time, more than any other president in the last 30
years.

"ABC was the most critical  78 percent of the
coverage of the president on ABC World News Tonight
was negative. On CBS, the coverage was 71 percent
negative. The study called NBC more balanced at 57
percent negative."

Fox was negative 40% of the time. That's more fair and
balanced than the other three.

To which I had to *Laugh* [Fox as *fair and balanced* - in what doppelganger universe could that ever be True. Hahahaha!] and respond that the supposition that Bush gets worse treatment by the press than any president than the last 30 year IS a direct relation to ACTUALLY being the worst president in the last 100 years.

When the history books and Bush legacy are written.. My contention is that its gonna be BUSH: the WORST President EVER.

And the media reflection of this viewpoint is not necessarily Bias when the guy has the worst record on:

What Don Wycliff encountered was a variation on that same old *whine* about the media is "liberal biased" (this one suggesting Favoritism of Bill over ole George) canard that is touted ad nauseum by all the right-wingers.

The further *proof* about Dons point is clear when you consider who the Right Wingers have turned into their media *darlins*:

That these people are always finding an audience on the airwaves shows what the right-wing is all about. HATE Mongering.

It also further undercuts entire "media is liberal" whine going on for the past few decades. If the issue was really about not wanting to be influenced by some BIAS in the MSM as a problem...then the most popular news program (about as centrist-unbiased as is anything rated out in the media-world) OUGHT to be "The News Hour with Jim Lehrer" for those people.

BUT, what do 90% of em watch and listen to?? The most biased right-wing, hate spewing ignorant stuff they can find - bar NONE. That's because that is not what they care about -UNBIASED Media- but rather that it ought to be 100% biased in their Right-wing favor or it's JUST not good enough.
So, a very Bah-Humbug on those Conservative Whiners... and YOU KNOW who you are!!! 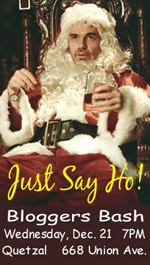